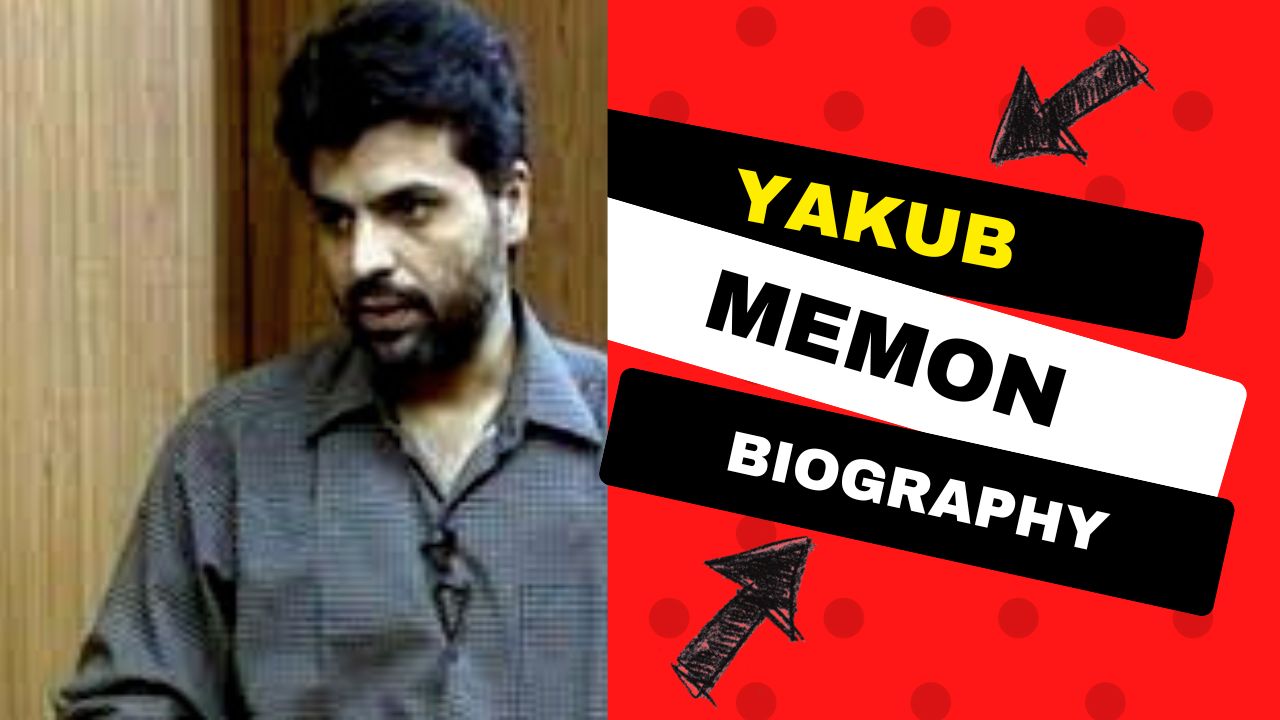 Yakub Abdul Razzaq Memon was an accountant who was convicted of terrorism for his financial involvement in the 1993 Bombay bombings.  He passed away on July 30, 2015, having been born on July 30, 1962. Yakub was the brother of Tiger Memon, who was one of the primary suspects in the bombings. On July 30, 2015, he was put to death at the Nagpur Central Jail after all of his appeals and petitions for clemency were denied.

Yakub Memon was born in Mumbai on July 30, 1962, into a family of Memons. He spent his childhood in the Byculla neighborhood and received his secondary education at Antonio D’Souza High School. At the Burhani College of Commerce and Arts, where he also studied arts, he earned a Master of Commerce degree. Memon began his studies to become a chartered accountant in 1986 after enrolling in the Institute of Chartered Accountants of India (ICAI). He received his certification in 1990.

In 1991, Memon founded the chartered accountancy firm ‘Mehta & Memon Associates’ with his childhood friend Chetan Mehta. The following year, they went their separate ways, and he went on to establish a second accounting firm known as “AR & Sons.” It was so successful that Memon was awarded the title of “Best Chartered Accountant of the Year” by the Memon community in Mumbai. The company was named after his father. In addition to this, he established the export business known as “Tejrath International” with the intention of shipping meat products to locations in the Middle East and the region of the Persian Gulf.

Part in the bombings

Memon provided financial support to his brother Tiger Memon as well as to Dawood Ibrahim during the planning and carrying out of the bombings. Memon was in charge of managing Tiger’s finances, purchasing the vehicles that were used in the bombings, and stockpiling weapons. He also funded the training of 15 young people who were sent to a secret location to learn how to handle arms and ammunition.

The Indian Central Bureau of Investigation claims that Memon was arrested at New Delhi railway station on 5 August 1994. On the other hand, Memon asserts that he turned himself in to the authorities in Nepal on July 28th, 1994. Memon was detained in possession of a briefcase that held a recording of a conversation he had in Karachi at the time of his arrest.

On July 27, 2007, Justice P. D. Kode came to the conclusion that Memon was guilty of the following offenses under the Terrorist and Disruptive Activities (Prevention) Act (TADA) court.

In accordance with Section 19 of the TADA Act, Memon had submitted an appeal to the Supreme Court of India, and the State of Maharashtra had submitted a reference to the court in an effort to have the death sentence against Memon upheld. The Supreme Court upheld Memon’s conviction and death sentence for the crime of conspiracy for his role in financing the attacks on the 21st of March 2013. The court decided that Memon’s role was limited not only to the extent of correspondence between the masterminds and all of the other accused, but he was also entrusted with the task of handling the explosive bags and for the safe keeping of them, which is stated in the confessional statements of various other co-accused persons. The court came to this conclusion based on the testimony of the various other co-accused persons. Additionally, it was determined that Memon was actively involved in hawala transactions for the purpose of facilitating the explosions. The panel of judges referred to him as the “mastermind” behind the bombings and the “driving force” behind them. Memon has never wavered in his assertion that he is innocent.

After that, Memon submitted a petition for review, asking the Supreme Court to reconsider its decision to uphold his conviction and death sentence. On July 30, 2013, a bench of the Supreme Court led by Chief Justice P Sathasivam and Justice BS Chauhan denied Memon’s request for an oral hearing and dismissed his review petition by circulation. The next step was for Memon to submit a Writ Petition to the Supreme Court, which he did at the same time the court was considering whether or not to hold an oral hearing on review petitions challenging death sentences.

On March 24, 2015, the review petition filed by Memon was the subject of an open court hearing.

Senior Counsel Jaspal Singh acted as Memon’s legal counsel. The petition for review that Memon had submitted was denied by the Supreme Court on April 9, 2015.

A death warrant for Memon was issued by the Maharashtra Government on April 30, 2015, and the date of his execution was set for July 30, 2015. The following month, on July 21, 2015, the Supreme Court dismissed Memon’s curative petition that he had submitted to the court on May 22, 2015. In the meantime, Memon submitted a petition for mercy to the Governor of Maharashtra. After that, he submitted a Writ to the Supreme Court of India, asking for a stay on his execution until the mercy petition was decided. He argued that the execution warrant was issued in violation of the law because it was issued before he had exhausted all of his legal options for appealing his conviction. A number of prominent individuals, such as Salman Khan, Research and Analysis Wing officer B. Raman, former Supreme Court judge Justice H. S. Bedi,[35] former Supreme Court judge Markandey Katju, Hussain Zaidi, Ram Jethmalani, Asaduddin Owaisi, R. Jagannathan, and a few Muslim bodies, have voiced their disagreement with the decision to execute Yakub Memon by calling for the Srikrishna Commission report On July 26, 2015, a petition was presented to President Mukherjee by a number of notable personalities and political leaders requesting that the president reconsider Memon’s request for clemency.

On July 28, 2015, Memon challenged the order that was handed down in the curative petition by submitting a new writ petition to the Supreme Court. In his petition, he argued that the required quorum was not present based on his interpretation of the rules that govern the Supreme Court. Following the hearing, the two judges reached opposing conclusions regarding the matter and issued an order requesting that the Chief Justice of India (CJI) immediately form a larger bench to consider the matter. The petition he submitted was denied by the Supreme Court on July 29. Memon also submitted a petition for clemency to the Governor of Maharashtra, C. Vidyasagar Rao, as well as a new petition to the President of India, Pranab Mukherjee; however, both of these petitions were denied. After exhausting all other options, the attorneys for Memon filed a petition with the Chief Justice of the Supreme Court requesting a 14-day stay of execution. They based their request on the requirement that there be a 14-day period between the rejection of a mercy plea by the president and the execution. The hearing of the arguments began at 2:30 IST before a bench consisting of three judges. Following the hearing of the arguments, the bench decided to uphold the execution and rejected the arguments presented by Memon’s lawyers.

The Yerwada Central Jail was where Memon was initially detained before he was moved to the Nagpur Central Jail in August of 2007. While he was incarcerated, he attended classes at the Indira Gandhi National Open University and earned two master’s degrees: the first, in English literature, was awarded to him in 2013, and the second, in political science, was awarded to him in 2014.

On the morning of his 53rd birthday, July 30, 2015, Memon was put to death at the Nagpur Central Jail at approximately 6:30 am IST. It was four in the morning when he was roused from his sleep, and he was given the opportunity to take a hot shower as well as a clean set of clothes. Before he was put to death, he was given the opportunity to pray and read from the Quran, provided with a final meal of his choosing, granted one final phone call with his daughter in accordance with his dying wish, and subjected to one last round of medical testing. The execution was carried out by a Pune police constable who had previously been responsible for hanging Ajmal Kasab. Since the practice began in 1947, he was the 24th person to be executed by hanging at Nagpur Central Jail.

His execution sparked a discussion on the use of the death penalty in India, with many commentators and activists calling for the practice to be abolished as a result.

Black Friday is a film directed by Anurag Kashyap. The role of Memon was played by actor and director Imtiaz Ali. The documentary includes some of the actual footage of Yakub Memon’s interview with Madhu Trehan of Newstrack. In this interview, Yakub Memon claims that his brother Tiger Memon and his associates in the criminal underworld were the ones responsible for orchestrating the conspiracy.