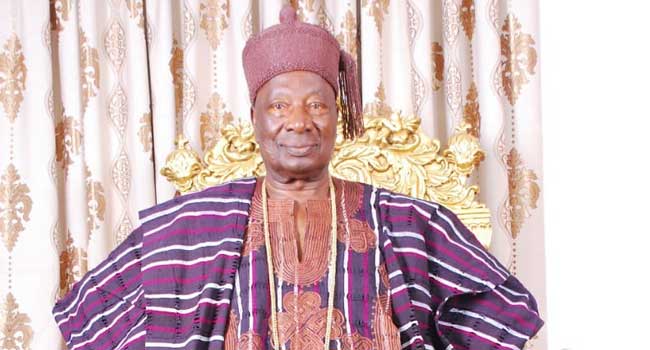 Oba Oladunni Oyewumi was born on May 27, 1926, with a silver spoon in his mouth, while his father, His Royal Majesty, Oba Bello Afolabi Oyewumi Ajagungbade II, was 10 years old on the throne. Oba Bello Afolabi Oyewumi Ajagungbade II, his father, was an ex-French soldier before rising to the throne in February 1916 and reigning until 1940. A 24-year reign that was both tranquil and exciting in Ogbomoso history. Apart from other significant administrative changes, he launched a single-handed revolution in Ogbomosoland by building dwellings and roofing with corrugated iron sheets instead of grass thatched houses.

Oba Oladuni Oyewumi’s attempt to obtain formal education was hampered by the abrupt loss of his father when he was only 17 years old. He had to leave St. Patrick Catholic School, Oke-Padre in Ibadan to go to Ogbomoso to reside with her mother, Ayaba Olatundun Oyewumi, after his father’s funeral. Following the ceremony, his mother enrolled Young Prince Jimoh Oladunni Oyewumi in the Ogbomoso People’s Institute in Paku, Ogbomoso, to continue his primary education. Because of the sporadic funding of his education, his tenure at Ogbomoso People’s Institute, Paku was brief. He had to leave to study a trade. He learned to weave from one of his older brothers. He travelled to Ilesha with his mobile weaving kits after graduation. He made a solid livelihood in Ilesha by weaving and selling Aso Ofi. Prince Jimoh Oladunni Oyewumi returned to Ogbomoso with a tidy sum of £ 4.10s.

After some time, Prince Oladunni Oyewumi decided to travel to Jos, Plateau State, and stay with his mother’s family members. He began to struggle in his efforts to become a successful businessman. He enrolled in one or two evening educational programs to supplement his educational background. This aided him much when his mercantile and financial acumen was acknowledged and he was named a CFAO Factor in 1954. He was so successful that he began importing items and beer from the United Kingdom and traveled to London and Duplin on business. He was even funded on business excursions to Western Germany to improve his imports of Becks Beer from Bremen and Heneiken Beer from Holland at the time. Similar business excursions were taken to Paris, France, and Nice, France.

His experience as a successful factor to CFAO inspired him to establish his own company. J.O.Oyewumi and Company (Nigeria) Limited was established by him. J.O. Oyewumi and Company is a thriving business with branches in Jos, Osogbo, Osun State, and Ogbomoso, Oyo State. The company operates three hotels: Hotel Terminus in Jos, Plateau State; Royal Crown Hotels in Ogbomoso, Oyo State; and Terminus Hotel International in Ogbomoso, Osun State.

His Royal Majesty’s road to the throne may have begun earlier than October 24, 1973, when he was seated and anointed as Alayeluwa Oba Oladunni Oyewumi Ajagungbade III, Soun of Ogbomosoland. He was Ogbomosoland’s first Soun to wear the beaded crown. The competition to wear a beaded crown was heated and exciting. Some leading Obas out of Jealousy and envy mislead the former Oyo State Government to provide early opposition to wearing of beaded crown by Soun but the truth won and Oba Oladunni Oyewumi Ajagungbade III recorded a major first as the first Soun of Ogbomosoland to wear a beaded crown in history.

It is difficult to list all of the accomplishments and advancements that have occurred in Ogbomosoland since the accession of Alayeluwa Oba Oladunni Oyewumi Ajagugbade III to the throne. He guided the Ogbomoso people in the construction of a suitable Palace, which was completed in 1978. Ogbomoso sons and daughters contributed all gifts, with Alayeluwa Oba Oyewumi Ajagungbade III managing the project with cash contributions and counsel. The Palace has gained a new Hall. His Royal Majesty, Oba Oladunni Oyewumi Ajagungbade III JP, CON, sponsored and erected Oba Oladunni Hall. On Friday, October 17, 2003, His Excellency Rashidi Adewolu Ladoja FNSE, the Executive Governor of Oyo State, opened and dedicated the hall.

During his reign, the Ogbomoso Judicial Division was established, and Oba Oladunni Oyewumi Ajagugbade III, JP, CON led his people in providing the initial accommodation and equipment. The foundation stone for permanent High Court Buildings has been placed. The construction of Ogbomoso Township Stadium was time-consuming and difficult. Olayiwola Oba Oladunni Oyewumi Ajagungbade III, JP, CON spearheaded the land donation. During his rule, the success narrative of the Oyo-Ogbomoso land boundary and the accompanying story of five local government councils are intertwined.

Oba Oladunni Oyewumi Ajagungbade III, JP, CON has contributed to the advancement of secondary education. As soon as he reached the throne, he established an education commission, chaired by late Chief N. A. Adibi, to prepare for the equitable distribution of secondary education in Ogbomosoland. Chief J.B. Ojo served as secretary, while other notable members were late Lawyer Olatunji Mohammed and Dr. Saka Balogun. The group worked to upgrade Baptist Secondary Modern School in Ajawa and Baptist Secondary Modern School in Oko to full-fledged secondary schools. Encouragement was provided to the establishment and naming of new secondary schools in Iresadu and the surrounding areas of Gambari, Igbon, and Ajase.

The establishment and location of the Federal Government College in Ogbomoso was a feather in the cap of Oba Oladunni Oyewumi Ajagungbade III, JP, CON. while the construction of Ladoke Akintola University of Technology was a lasting tribute to our community. The rapid expansion of private nursery/primary/secondary schools in Ogbomosoland attests to significant progress in education. We must not lose sight of the chieftaincy system’s significant advancement. Modern reforms are being implemented in the appointment and remuneration of chiefs. Oba Oladunni Oyewumi Ajagungbade III, JP, CON recognizes and confers honorary chieftaincies on prominent members.

There are also other areas that require attention. The path of 30 years has been filled with various and innumerable accomplishments. The Alayeluwa Oba Oladunni Oyewumi Ajagungbade III, JP, CON has laid and still laying foundation of various achievements. The Ogbomoso Ultra-Modern Business Centre is already under construction. Cities and towns have grown in size. Roads are being built and tarred, and small-scale companies are sprouting up on a daily basis. Alayeluwa Oba Oladunni Oyewumi Ajagungbade III, JP, CON’s family life is noteworthy. He is happily married and has numerous children who have received and continue to receive an excellent and sound education. The community’s Ayabas are the envy of their peers. There are many lawyers, master’s degree holders, and doctors of philosophy among the children, and the young university graduates are still ascending the ladder of success in life.

The Federal Government of Nigeria, led by our excellent President, Olusegun Obasanjo, gave him “Commander of the Order of the Niger” in recognition of these peaceful advances in Ogbomosoland. It is a well-deserved national honor that no preceding Soun has ever received.