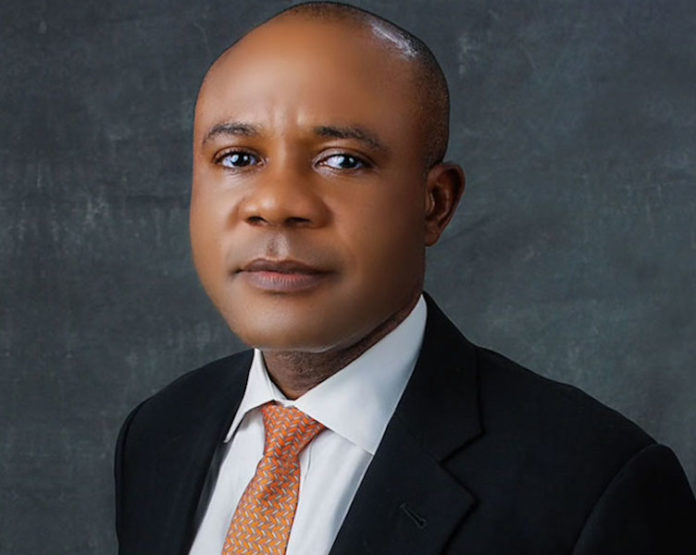 Peter Ndubuisi Mbah, founder and chief executive officer of Pinnacle Oil and Gas Limited, an indigenous oil and gas company, addressed students at Godfrey Okoye University in Enugu, Enugu State, to mentor the students and assure them that, despite their current existential limitations, they could have a handshake with the sky. This encapsulated his life path and his development to become one of the most influential leaders in Nigeria’s oil business. Mbah turned 50 years old in March of 2022.

Mbah began his unassuming, incisive sotto voce observations by taking a shuttle into the thorn patch of life he had traversed barefoot.

“What you have effectively requested of me this evening is to recount my tale, particularly the narrative of the most recent chapter of my life, which I refer to as the midlife battle. Joe Girard once said, “The elevator to success is broken; you will have to take the steps… one step at a time.” I will be depending on this immortal remark for my brief conversation with you this evening.

His life history, according to Mbah, represents the short, measured steps of the ladder. “The first step was taken with ease, the second with great pain and discomfort, and the last two were lifted as if taking easy steps; this was my life from the beginning.”

Today, Mbah’s Pinnacle is one of the industry’s major players, having eliminated the need for several operations in the oil business. Mbah’s Pinnacle holds one of the largest oil facilities in Nigeria, with a world-class, gigantic storage facility that has allowed the industry to drastically reduce operating expenses and turnaround time. In addition to providing one of the largest offshore liquid bulk terminals in Africa, the company creates value through its superior services.

Young Peter began school at the Army Children’s School, Bori Camp, Port Harcourt, Rivers State, at the tender age of five, and his brilliance caught the attention of the entire school. Peter began reading biographies in Elementary school, the most notable of which was This Life, a voluminous biography of famed Hollywood actor Sidney Poitier, the first Black man to receive the Academy Award for Best Actor in 1964 for his part in Lilies of the Field. This Life is the story of how a poor young man from the Bahamas, who could not speak English well, arrived to the United States, cleaned the streets, begged in shops, and eventually found work as a street cleaner. Eventually, Poitier improved himself and received an Oscar. This story, which Peter read at a young age, pushed him to strive for the top despite the immense existential constraints he faced at the time.

This same man, at the age of 12, was the young boy who confidently told his mother that he would rather drop out of school and begin trading than have his siblings’ education halted because of his admission to college. His parents were at a financial crossroads because his admission to college would mean the end of his siblings’ education. From Port Harcourt, he was sent to a family friend in Lagos, where he lived and worked as an apprentice electronics boy at Alaba Market.

Mbah’s ascent to the summit of his career has not been a cup of tea. Peter has a Bachelor of Laws (LLB) from the University of East London, a Master of Business Administration (MBA) from the IESE University of Navarra, Spain, and a number of other degrees. He has always had a talent for business.

In his words, “I have packed a lot of misery, frustration, disappointments, and tough tackles into my short life, but I have done so with a great deal of dedication.” Peter, describing the business magnate and boardroom tycoon he subsequently became, said of himself, “I am a man whose life story can be summed up as one who has an eye for the uncommon and runs the race of life with extraordinary vigor.”

Those who are startled to see Peter at the top now would be even more astonished to learn that he began his journey to the top as a trader of various types.

“After a while of doing this, I realized I had saved enough money to support myself. Then, I crossed paths with a German firm that began shipping me Mercedes Benz parts. I sold them in Nigeria and remitted the proceeds to Germany, like I had done previously,” he stated.

Then, a second chance presented itself. Peter, at a young age, began to represent a Turkish corporation and rose to become its sole representative. The corporation shipped its items to him, and once he sold them, he would return their funds to them.

“The corporation granted me an open credit at a period when the average Nigerian was suspicious of international business partnerships.” “The lesson I learned from this interaction with the corporation is that trust is a currency that can be spent as soon as its balance is depleted,” he told the undergraduate students gathered to hear him speak.

“I met my brother, who was the vice president of an international corporation, in 1993, and he asked me to represent his company in Nigeria. His firm imported crude oil from Nigeria. He wanted me to represent the corporation in Nigeria, and we agreed that I would receive 25 cents per barrel of oil extracted from the country. Due to the fraudulent nature of some Nigerians involved, this enterprise went aground after a brief period of success. I lost a significant amount of foreign currency, but my resolve increased.”

This setback prompted Peter to consider the idea of becoming a big player in the oil sector. The purchase was unsuccessful, and although he lost a substantial amount of money, he earned an opportunity to study the oil industry and, most significantly, the determination to reach the top. He informed the young students that the lesson to be learned from his actions was that honesty and perseverance are linked Siamese twins that die one after the other.

The desire to instill these noble qualities in future generations drove him to start Focus International Schools, a primary and secondary school that he designed to be world-class.

“I began to consider establishing my own oil company. “Thereafter, I engaged in a number of shipping and oil and gas firms, followed an academic career, and even ran for an electoral seat in Enugu State in 2003,” he explained.

This was a pivotal moment in Mbah’s life. Even though he lost the election, the governor of Enugu State at the time, Dr. Chimaroke Nnamani, requested that he be brought to him and named his Chief of Staff due to the remarkable sophistication of his campaign. He became the state’s Commissioner of Finance and Economic Development later on. NewsWatch magazine’s special publication of 3 July 2006 referred to Mbah as “a man ahead of his time” as a result of the exceptional advancements he made in the state’s fiscal operations and the strategy document he created, which became the operating document for the Enugu State government’s development programs.

After his public service career, Mbah returned to Lagos and hired a one-room office on Ahmed Onibudo Street, staffed by himself, a secretary, and an office assistant. This oil marketing corporation initiated the purchase and sale of oil products.

In his oil marketing business, Mbah told the students, “I understood what clients wanted and used a customer-centric approach to marketing. I also implemented a cost control measure, focusing on operational concerns and cost-cutting strategies. We were involved in oil and gas as a result of a series of events. It was a combination of determination and perseverance that led us to our current position,” he remarked.

Mbah went on to discuss the difficulties he had in the industry, adding that it was not all roses. He stated that the sector was a closed-circuit one with several stringent restrictions, but that despite the challenges of the industry, it allowed for a degree of expansionism, as his own company had grown wonderfully since its inception.

“Here, you must obtain permission for every aspect of your corporate ambition; innovation is literally frowned upon,” he remarked.

Then, Mbah deviated into history. “The Oputa panel of inquiry in 1975, which resulted in the Petroleum Control Decree of 1975, was the forerunner of this high regulatory apparatus in the oil industry today. This program led to the development of refineries and the central control of product distribution, price regulation, etc. Nigeria has never been the same since,” he added.

Then he returned to the nature of Pinnacle’s operations, noting that the company had reached such a level of success in the oil and gas industry that it could no longer stand by and let others become the dominant players.

How did Peter reach the summit? He peered into nothing in particular and stated matter-of-factly that the journey had taken two different routes. To become the CEO, the man who calls the shots at the pinnacle of a company, there are two possible paths: “One path is what I call the home track trajectory, and the other is the outside the circle trajectory,” he explained.

“In the first scenario, the CEO is a professional who ascended through the ranks within the system to become the head of the company; in the second scenario, the CEO is recruited from the outside. Both have their respective benefits and challenges ahead. I became the chief executive officer of Pinnacle Oil and Gas by adopting the first path. “I am someone who traversed a route riddled with thorns to ascend to the summit of his career,” he remarked. In all of these, both Pinnacle and Mbah continue to look to the future. “At Pinnacle, we have realized that reaching the top is not the end in and of itself. We must exert considerable effort to maintain the techniques that have kept us afloat. Any company that refuses to grow will be absorbed by companies that are expanding, or it will disintegrate into nothingness. Our aim for the foreseeable future is to consider joint ventures, mergers, acquisitions, and the like in the same industry with firms that share our values so that we may complement each other and grow. God is ultimately at the forefront of our endeavors.”

Mbah’s concluding remarks to the pupils were, “Distinguished ladies and gentlemen, these are the arcs of this young man’s life trajectory.”

As the ancient adage goes, man proposes and God disposes; the great people of Enugu State, oblivious to Mbah’s mergers, acquisitions, and joint ventures for Pinnacle, are requesting that he abandon all those lofty ambitions, leave a company whose annual revenue is greater than their state’s earnings in eight years, replicate the turnaround he engineered at Pinnacle in his home state, and manage their affairs as he did at Pinnacle. Will Peter answer the summons?