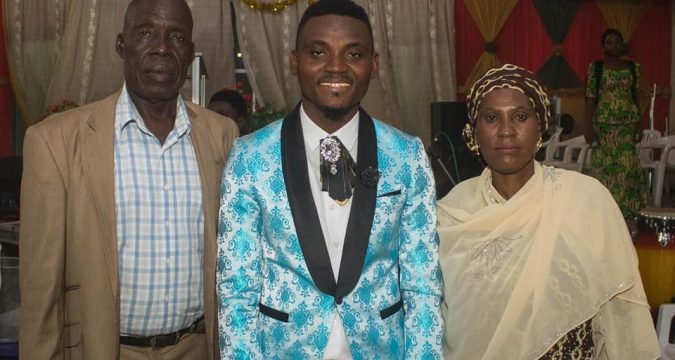 Born on the 25th of December, 1990 to parents of different religions but united by fate to birth destiny, dad a Mobile Police officer native of Demsa in Yola and practicing Christianity and mum a Fulani from Niger that hawks Fura and Nono (Fresh cow milk and Millet) practicing Islam, joined by life’s Journey in Baga. Their unity gave birth to a young man named Bashir Mohammed, now known as Panam Morrison.
The journey that led Bashir Mohammed to Panam Morrison is thrilling, invigorating, and life-changing. Let’s unravel this journey.

Dad was posted to a town in Baga LGA of Borno State; while serving his country, he met a Fulani woman whom their union gave rise to a boy named Bashir; while yet unborn, his father was sent yet on another assignment to a foreign country Darfur, the child grew to know only his mum and practiced her religion, they moved with his mum to Cross Kauwa in Kukawa LGA. In contrast, a kid attended the Basic Quranic pieces of training and practiced Islam in 2000 when he was just ten years old. They moved again to Ummurari, a locality in Maiduguri capital city of Borno, where he attended his First Quranic School in a Sangayya. After which, he took him to Uba LGA, where he became an Almajiri, scavenging for food and living on the streets, a four-year experience of hardship and loneliness, which occurred in 2003 – 2007.
After this experience, he went back to Cross Kauwa to be with his mum. During this period, he became a subject of ridicule as his peers and people around him began to call him a bastard and demanded that he explain his paternity; out of desperation, he began to quiz his mum about the identity of his father.
It was in this period of haywire that new Mobile Police Officers were posted to their locality and the mum approached them to question the whereabouts of the father of her son, as God deemed it fit, he stationed someone amidst them that happened to know the father’s whereabouts and where he might likely be, one Late Inspector Zama who resided then in Wulari Police barracks in Maiduguri was able to furnish the mum with enough information to track down the dad, he rightly informed them that the dad was serving at Ogun state (a city at the Western area of Nigeria) this all happened in the year 2008.
The search began; son and mum embarked on a journey of faith and discovery. They left Cross Kauwa to Monguno boarding on a DAF Trailer meant for transporting animals (Cattle) to Lagos, a city beyond Ogun, their destination; after days, they arrived at a nearby town, Shagamu. Famished they decided to eat at a close-by restaurant while eating and discussing in their native tongue, their conversation was overheard by a man that understood them, and he joined the conversation and asked about their mission; on hearing their mission, he offered to help, which he did by providing logistics, accommodation, and resources to aid their mission of discovery.
This man decided to take them to his daughter’s house at Ogun state Police Barracks, promising that her husband being a police officer should help unravel the father’s identity. On their arrival at about 5 pm, the man’s daughter welcomed them warmly and made them comfortable, the man narrated their ordeal, and the daughter was glad to offer assistance.
The mum and son now decided to show her the picture of the man they came to search out, on sighting the picture she was amazed as she knew the man to be her husband’s Senior Colleague and boss at the office and that they work closely together. God is a miracle worker who directs their footsteps to the right people at the right time and place.

Panam Morrison Re-Union With His Family

The information got to his father, and he happily went to meet and be united with his son for the first time; the dad hugged his son and accepted him as his own. They stayed with the dad for a month, and another call of service came for the dad to leave again for other operations, and they decided with his mum to head back to Cross Kauwa.

They continued with their way of life on arrival, and he remained a Muslim and worshipped at Flattari Juma’at Mosque (Central Mosque). He enrolled in the Islamiyya for a higher, deeper knowledge of the Quran, to study “the Taoheed.” While on this path, an annual event called the “Maulid” came around, and he was apportioned to recite the fortieth Hadith or chapter of the Quran referred to as “Arba Una Hadith,” which he did well.
The hadith is an account in the Quran about the Creation and lifetime of Man on earth. It depicts how every man born on the earth has two roads open to him to follow and how one way leads to hell and the other leads to heaven. It records that some men can live on the right path to heaven and at the tail end of their lives, by an unfortunate turn of events, can find themselves on the path to hell and end up there and vice versa. That very night after the recitation, the hadith came as a dream, and questions began to spur up in his heart during the dream, asking him which way do you belong or on which path are you currently.
On the morning of the next day, he woke up puzzled by his dream and began to question his Christian neighbor called “Friday,” a mechanic who is also a leader of a fellowship in Cross Kauwa who stayed with one Mikailu Omega, a force man (Mobile Police). So he Bashir began to question them about Christianity, and they began to tell him about the love of God and the beauties of Christianity. He was led to confess that he had been part of those destroying the fellowship tent, and they told him that they were aware of it. He was puzzled at their negligence to retaliate, and they replied to him, saying Jesus told them not to pay evil with evil and always be peaceful and follow peace with all men.
After this encounter, his zeal and passion for the Quran started to wear out, which led to abscondment during prayers and activities of the Muslim fate, which his mum and some friends readily noticed. They all started cautioning and warning him using parables and threats. During this dilemma, he informed his dad’s return to Nigeria. They left with his mum to Maiduguri police barrack war at the residence of late inspector Zama. He got united with his other siblings, Mema Morrison and Harrison Morrison, at his house. They warmly accepted him and told him of their father’s instruction to accept him as their brother. That is how he was taken to his elder brother’s house Harrison Morrison, a police officer, and things took on a new dimension for him. On the day, his father demanded to see him introduce him to his other siblings and step mum or rather his father’s wife.
His father changed his name from Bashir Mohammed to Panam Morrison at this juncture. Panam means “God has given me” in Mbula language, and he prayed and blessed him and Bashir now; Panam has remained with them ever since.
Pastor Ishaku Usman of ADC was one of the pastors his family worshiped and often visited the home to lead Bible Studies during those days. They now developed a relationship, and the Pastor took a keen interest in the young lad and was able to show him the love of Christ in action.
During this period, the dream that earlier puzzled him came back with more clarity and urgency. The dream came with a direction to follow Jesus as the real way to heaven. So he approached the Pastor and narrated the dream.
The Pastor now explained further the dream and led him to Christ and placed him in a Baptismal class for six months to be properly fed God’s word and be baptized into the Christian faith; he was then Baptised by Rev. A.Y Zaki and his associate Rev. Monde Iko. Immediately after the baptism, his love and passion for music were ignited, and he joined the church choir to express his passion through music.
Panam began to have inspiration from songs he wrote and began composing and singing. On one occasion, he taught the choir one of his songs which they later ministered in a Sunday Service, which blessed the lives of its listeners. One of those inspired was Pastor Ishaku Usman, who commended the song. He instructed him to write down his songs in a book and submit them to him for prayers and editing, and he tutored him on songwriting. This was in 2012.
Pastor Ishaku now told him God had inspired his heart to sponsor his first album titled (From Darkness to Light) that marked the beginning of his music career and a Christian youth outreach movement that grew into an annual “unity concert ” which eventually evolved into a full-fledge interdenominational outreach music ministry called ”Panam Gospel Music Ministry.” Since 1st Feb 2013 to date.

1. Holy Spirit led: We are centered in God. Holy Spirit leads our thoughts and actions as we co-create a world that works for all.
2. Generous: Living in the infinite flow of God’s goodness, we draw from God’s inexhaustible supply and wisely use our rich resources to serve Humanity.
3. Transformed: We are a dynamic movement on the edge of spiritual evolution. We teach universal principles that change lives for God.
4. Uniquely Gifted: We believe that all people are created with secret gifts. We promote people’s hidden gifts and potentials in the spirit of unity for advancement in the Kingdom of God here on earth.
5. Integrity: We act from a place of wholeness and are ethical in all our actions. We keep our word.
6. Unity: Unity is all we need to excel in our generation.

So far, the ministry has been hosting ”UNITY CONCERT ” for the past five {5} years within Maiduguri metropolitan and Other states in northern Nigeria. The purpose of this convention is to unite the body of Christ irrespective of tribes, ethnicity, and denominations through Gospel Music.