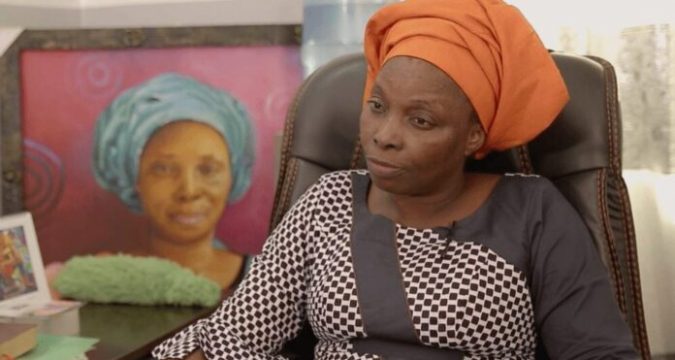 Mummy GO is known to be a pastor who later turned comedian. You might be amazed at my first sentence, but that’s just the truth. Mummy GO started her ministry and became a trend in Nigeria after outlining things that could take us to hell. People were amazed by some of the things she did say. According to some of the videos she had made, she said anybody who is a football superstar would go to hell fire after death.

Mummy GO took this seriously as she is a church pastor in Ogun State. As you all know, Nigerians are very talented in entertainment; they quickly turned the portrait of this woman into memes. They made the picture of this woman appear on both words she uttered and the one she did not utter.

Stay glued to this article as I will figure out the biography of Mummy GO (Evangelist Funmilayo Adebayo), her trends, memes, preaching, and her church address.

On the 15th of June, 1970, Evangelist Funmilayo Adebayo was born into this world. She is the General Overseer and Founder of Rapture Procalimer Evangelical Church of God.

Mummy GO took her stand to become a trend through her controversial teachings and preachings. Thou this woman of God is gifted with some heavenly disciplinary vocals.

As of this moment of writing, Mummy GO is 51years of age.

According to Mummy GO’, she explained to her congregation that she had suffered a lot in her life. She analyzed how poverty battled with her both physically and spiritually. Mummy GO exaggerated that she was suffering from poverty and hunger at a particular stage of her life.

About Mummy GO’s preachings, she said she was once a beggar in Ifo, Ogun State. She said she would feed herself and try to afford money to buy batteries into her megaphone. Mummy GO was known to be an evangelist at that time, and her duty was to be preaching the word of God all over the community. She also made it known that she always used her money to print tracts sometimes.

‘I did menial jobs to raise funds for my evangelist, ‘ Mummy GO explains to her congregation.

Evangelist Funmilayo Adebayo (Mammy G O) narrates that “One day in the kingdom of darkness, she was going to hell to carry out an assignment. Suddenly, somebody shouted her name, “Funmilayo”, and she was shocked. she was shocked because she believe that nobody knew her real (earthly) name. So, who could have known her name in a place where her relations or people that know her could never be found? Suddenly, she was set on a very high speed and as she sped off, she heard the name, “Funmilayo” again.

She Said “When I heard the name the third time and I turned to rebuke the person, I saw a very handsome, huge, awesome, and attractive personality. Then, I sensed that Jesus Christ must have been calling my name. I also remembered that during our training in the kingdom of darkness, we were taught about Him. The name they call Him there is Son of the Owner. Nobody dares call His real name (Jesus) because the name is so strong and mighty that it shakes the kingdom to its roots. Based on the way He was described as the most handsome, I was sure that the personality I saw was true, Jesus.

When I made boldly and turned to face Him, I asked: “What can I do for you? Who are you?” He replied: “I need you” and I replied that I was going on a mission. He said that He knew that I was going on a mission. Immediately He said this, my body was on fire and I surrendered and said: “I will go with you, I will be with you.” I also told Him to, “send me, I will go for you.” But later, I made bold to tell Him: “

A servant cannot serve two masters. I have my own master. You know your people and your people know you. Why then are you coming for me?” But He said to me: “I own both you and your master. Heaven and earth belong to me. I own everything.”

When I looked into His eyes, they were glittering like a burning fire and light that are incomparable with any other fire and light. They were so bright that I almost got blinded. Since then, my eyes are still not normal. I can’t see properly and I can’t read even a signboard or use glasses. I can only manage to read my Bible.

Recently, she alleges that those making use of the master cards will certainly go to hell. Her prophecies have surfaced online today, causing uproar on social media.

Get the latest trends & memes of Mummy GO HERE