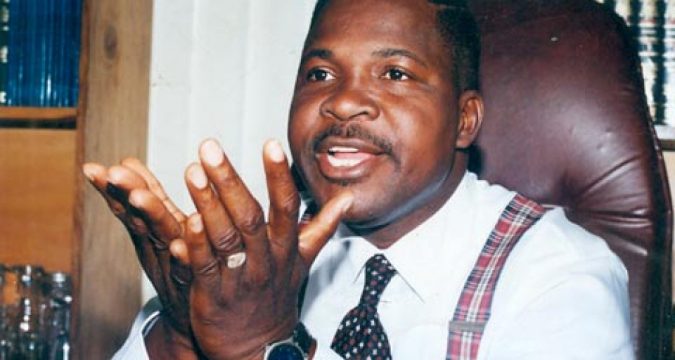 Dr Mike Agbedor Abu Ozekhome, SAN, attended St. Mary’s Catholic Primary School, Iviukwe, between 1964-1969, after which he attended St. Peter’s College, Agenebode, from 1970-1974. He concluded his secondary education in flying colors and obtained his WASC with top grades in 1974. He was the best student in 1974, he was at Baptist Academy, Lagos, for his Higher School Certificate (HSC) course in 1975, before he gained admission to the University.

He was offered admission simultaneously into three renowned Nigerian Universities, UNN, Nsukka to read Mass Communications, University of Ibadan, to read Political Science and the University of Ife (now Obafemi Awolowo University), Ile-Ife, to read English language. He opted for the University of Ife, with a student population of about 15,000, to read English language. As a result of his foresight and resilient nature, he succeeded in changing his course of studies from English Department to the faculty of Law in the same University, losing, voluntarily, one academic year in the process to actualise his passion and dream of the Legal profession. Throughout his University days, he was a leading student activist, the best debater and one time acting Speaker of the student’s parliament, the Student Representative Council (SRC).

High Chief (Dr) Mike A. A. Ozekhome, SAN, graduated in flying colours with Bachelor of Laws (Honours) degree in 1980. He became a Barrister at Law in 1981 after graduating from the Nigerian Law School, Victoria Island, Lagos. He did his pupilage and vacation attachment with “Peoples Lawyer”, late Chief Kanmi Isola Osobu.

Dr Mike Ozekhome started his professional legal practice as a Youth Corper posted to Yola, the capital city of the then Gongola State, now Adamawa and Taraba States, but got redeployed to the Federal Ministry of Justice, Lagos, as he felt his services and bubbling energy were grossly underutilized. He was subsequently seconded to the then National Provident Fund (now Nigerian Social Insurance and Trust Fund (NSITF), where he served as state counsel. Thus, while working as state counsel, he joined the legendary Chief Gani Fawehinmi on a part time basis to unleash part of his bubbling professional energy and zeal. This was later to sharpen his advocacy skills and build a stronger platform for his fiery human rights activism and dogged defence of people’s rights.
In 1982, Dr Mike Ozekhome was back to his alma mater at Ife, to pursue his masters’ degree programme. He also joined the staff of the faculty of law to teach law. He therefore lectured simultaneously as he pursued his masters’ Degree programme. Many of his 1982/1984 Law students are today SANS, judges of superior courts, Ambassadors, top Military and Police Captains of Industry and top civil servants.

He bagged his LL.M in 1983 and immediately went back to his first love, advocacy in the busy Chambers of Chief Gani Fawehinmi, to work first as a junior counsel, later as a senior counsel and finally as the Deputy Head of Chambers by 1985.

As a renowned Constitutional lawyer, High Chief Mike Ozekhome, has handled and participated in many epochal and sensational cases that have shaped Nigerian Legal jurisprudence and enthroned Human Rights, Democracy and the Rule of Law. A few of them include the Oil Subsidy case, Umanah Umanah (“Port-Harcourt money-man”) case, the CLO 500 detainees case, the on shore/ off shore suit, 36 Houses of Assembly against Senate suit, the General Zamani Lekwot death sentence case, the Gani Fawehinmi “Gwagwalada five” case, the Nzeribe vs Senate case, the ICPC vs senate case, the Mike Ozekhome vs. President Ibrahim Babangida case, the Anyim vs Akanbi case, the Uduehi vs. N’Abba case, the Alamieyeseigha series of cases in Yenegoa, Abuja, Lagos, Port-Harcourt, etc, the Dr. Daboh vs National Assembly case, FRN vs Fani Kayode case, the numerous cases of FRN vs Chief Kenny Martins, Senator Bob vs. Chief Imeh Albert Akpan, George Odom vs. Senator Barigha – Amage case, F.R.N vs. El Rufir & 2 Ors, Daar Communications Ltd vs. NBC, etc. the Fidelity Bank vs. Communication cases, the Salami vs NJC case etc. He has handled numerous cases on election petitions and those bordering on sensitive constitutional law issues.

In 1986, Sir, Mike Ozekhome, founded the law office of Mike Ozekhome’s Chambers. He has offices of his chambers in Lagos, Abuja, Benin City and Agenebode. He coordinates the activities of the various law offices from the Head office, Lagos and on internet from any part of the World. He also ensures that he is physically present in other branches of the firm to lead his juniors in major cases.

Outside legal practice, Dr Mike A. A. Ozekhome has held various positions and appointments which include:

• Member, Board of Advisers, National Association of Nigeria Traders (NANT) (since 1998).

• Patron, University of Benin Law Students Association (LAWSA) (since 1988).
• Patron, University of Ile-Ife Campus Chambers (since 1988).
• Fought numerous detention cases, getting released and freed from illegal incarceration and jail, hundreds of Nigerians.
• Sir Mike A. A. Ozekhome was detained several times between 1986 and 1999 gun-totting Security Agents of the Federal government on account of his Human Rights and Pro-Democracy activities, especially during successive military juntas.
• Founder, Mike Ozekhome Foundation (MOF), a wholly philanthropic and charitable organization committed to salvaging from ignorance, abject penury, hunger, disease and squalor, the down-trodden and wretched of the society. This Foundation is involved in granting interest-free micro credit facilities, promoting sports and social welfare, granting scholarships to indigent but brilliant students of secondary and tertiary institutions, youth and woman development and empowerment through provision of motorcycles, sewing machines, etc and general re-engineering of the society.
• In 1990, he was cited by the Lawyers Committee for Human Rights, New York, in its 1989 and 1990 annual reports: “In Defence of Rights: Attacks on Lawyers and Judges”, a report that chronicled lawyers whose lives were endangered across the World consequent upon their Human Rights and Pro-democracy activities.
• Sir Ozekhome in March, 1990, participated in the International Visitors Programme to the United States of America between February and March, 1990, wherein he visited Human Rights bodies, including Lawyers committees, professional leagues, corporate bodies, minority groups, prisons, Law Schools, Congress, etc, in Washington D. C., Austin, Texas, Atlanta, Georgia, Los Angeles, California, Yakima and Seattle, Washington State, Boston, Massachusetts and New York, New York State (1990).
• High Chief Mike A.A. Ozekhome, San has travelled far and wide, to many parts of Africa, Europe, the Americas and Asia, attending conferences on Human Rights, Alternative Dispute Resolution (ADR) and professional matters.
• A sportsman to the core, he is the promoter of Ozekhome Babes Football Club (a female team since 1987) Iviukwe Bombers and Akpakpa Vighi Vighi Crusaders. He has sponsored foot ball competitions and inter-house sports competitions in Etsako Local Government Area and Weppa Wanno (since 1984).

As a philanthropist extra ordinaire, Dr Mike Agbedor Abu Ozekhome, has uplifted numerous individuals and organizations. He awards numerous scholarships to indigent students at both secondary and tertiary levels of all schools in Nigeria, particularly in Edo State.

A consummate Author who has written four Law books and over 200 articles, Dr Mike A. A. Ozekhome, is a realist with stoic determination. His guiding principles are: be bold, courageous and fearless in the defence of peoples rights. He is highly detribalized. He believes in the infallibility of God, the dignity of man and full respect of his God-given liberties and freedoms. He believes in one Nation only to the extent that such entity is characterised by a sense of social justice, peace, equity, equalitarianism and mutual respect by the various Nationalities for one another. The Nigerian people attest to his illustrious credentials, avalanche of achievements and strong legal pedigree.

Dr Mike A. A. Ozekhome is extra ordinarily gifted and is a leading light in Human Rights Activism, social justice crusade, public affairs analysis and oratorical prowess. He is popularly called the “peoples lawyer” “Senior Advocate of the Masses” and “Voice of the People”. He is a leader, role model and mentor through whom many people have risen and realized their God-given potentials. Dr Mike Ozekhome has attracted to himself over 40 traditional and honorary Chieftaincy titles received from across Nigeria, the most famous of which is AKPAKPA VIGHI VIGHI OF EDO LAND (Generalissimo and Supreme Commander of the Traditional Armed Forces). This title was jointly bestowed upon him at Ekpoma, Edo State by all the 72 traditional Rulers of Edoland.