On Sunday, India celebrated the 153rd birthday of Mohandas Karamchand Gandhi, who is better known as Mahatma Gandhi. Gandhi was an important figure in India’s fight for freedom.

Gandhi, as his followers reverently call him, taught the philosophy of nonviolence and is known as an icon of peace who guided India’s politics with his morals.

Gandhi was born on October 2, 1869, in the Indian state of Gujarat. He was a leader in India’s fight for freedom from British rule.

Gandhi was remembered by Indian Prime Minister Narendra Modi and other Indian leaders.

Modi went to New Delhi’s Raj Ghat, which is a memorial to Mahatma Gandhi, to pay tribute to the great leader.

“His ideas are heard around the world, and his words have given hope to millions of people,” “Modi said.

Many events were held in India and around the world to honor Gandhi’s birthday. 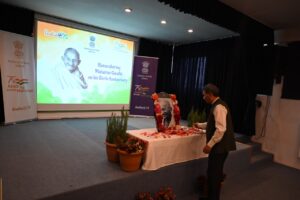 Rahul Gandhi, a top leader of the main opposition party in the country, the Indian National Congress, said: “Gandhi is often called “Bapu,” which means “father.” Bapu taught us to follow the path of truth and nonviolence. He talked about what love, compassion, harmony, and humanity are all about.”

On Saturday, Indian President Droupadi Murmu said: “Gandhiji showed all of humanity what it was really capable of and proved the power of kindness.

“Let’s promise again to follow his path, which is the path of truth and nonviolence, to work for peace and the progress of the country and the world.”

An early-morning march was held by the Indian embassy in Ankara to honor the birthday of Mahatma Gandhi, a leader for freedom in India.
On Gandhi Jayanti, which is the anniversary of his birth and one of India’s three national holidays, the Indian Ambassador to Turkey, Virander Paul, and other embassy officials paid floral tributes to Mahatma Gandhi.
Sunday, Antonio Guterres, who is the Secretary-General of the UN, tweeted: “On the International Day of Nonviolence, we celebrate Mahatma Gandhi’s birthday and the values of peace, respect, and the basic dignity that everyone has. We can solve the problems we face today by embracing these values and working together across cultures and borders to make the future better.”

Nathuram Godse shot and killed Gandhi on January 30, 1948. He was at a prayer meeting at Birla House, which is now called Gandhi Smriti. Birla House was a large mansion in New Delhi. He was later put to death for killing the man.