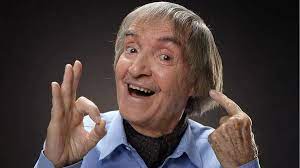 Carlitos Balá was the stage name of Carlos Salim Balaa, an Argentine actor who was born on August 13, 1925 and passed away on September 23, 2022. He specialized in providing entertainment for youngsters. Both his bowl-cut haircut and his gibberish catchphrases were instantly recognizable characteristics of him.

The fact that Balá had a regular television program cemented his position as the most popular character in children’s entertainment, placing him on par with Piluso and Pepitito. The event featured Angueto, an ethereal dog that Balá would lead about on a taut leash. Angueto was the star of the show.

In addition to performing during Argentina’s summer tours, Balá was a star in a number of films geared toward families, the most notable of which was the Canuto Caete series, which were released in the 1960s.

Mustafa Balaa, Balá’s father, was a butcher in Beirut and was of Lebanese descent. On the side of his mother Juana Boglich Catturich, he had origins in Austria (grandfather Nicolás), Uruguay (grandmother Felicia), and Montenegro (grandfather of Felicia’s father Juan Andres). Juana’s maiden name was Catturich.